We use cookies and other tracking technologies to improve your browsing experience on our website, to show you personalized content, to analyze our website traffic, and to understand where our visitors are coming from. Learn More.
Planets 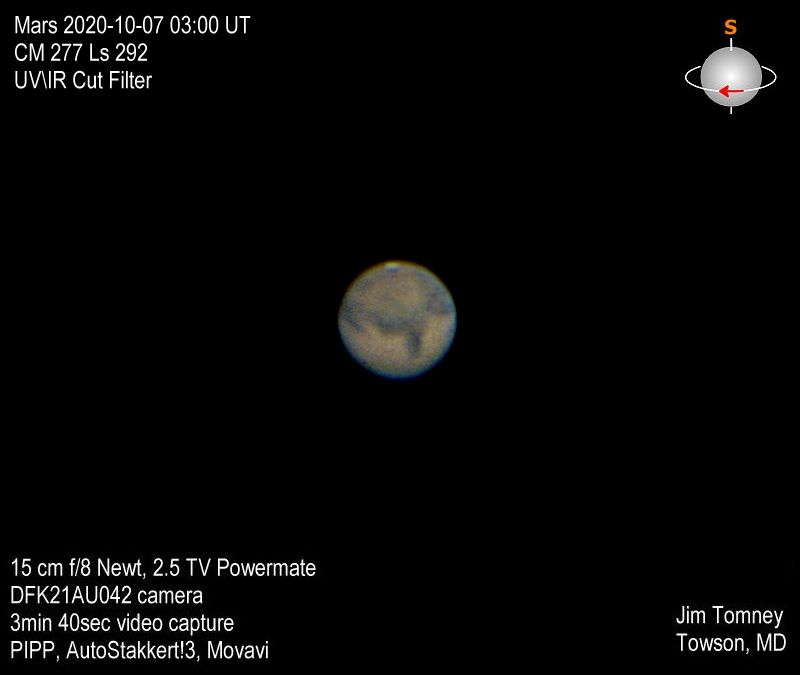 Mars during a relatively close approach to Earth in 2020. The wedge-shaped Syrtis Major is prominent, a tiny South Polar cap at top, and the finger-like projection on left side is Mare Cimmerium. Taken with my RV-6 Criterion 6" Newtonian reflector from our driveway. 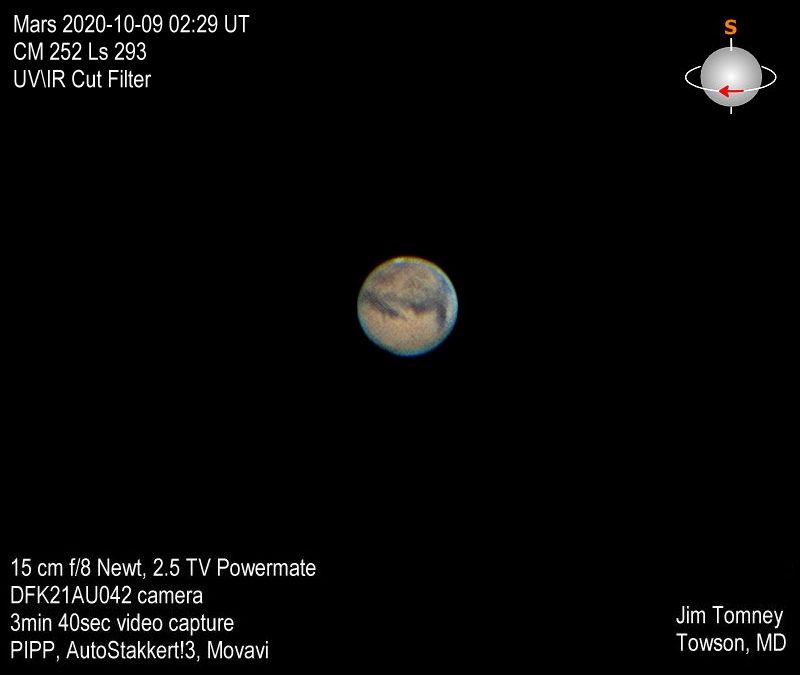 2020 image of Mars during a perihelic oppositiion. The prominent, wedge-shaped Syrtis Major is just rising on the right, South Polar cap as a white dot at the top, and the finger-like projection extending from left side to globe's center is Mare Cimmerium. Telescope: RV-6 Criterion 6" Newtonian reflector with a 2.5x TeleVue Powermatey. 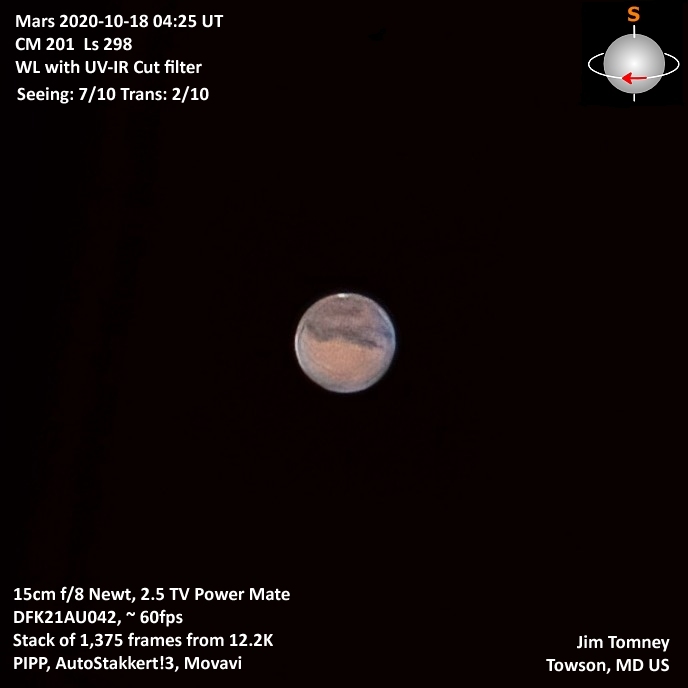 2020 image of Mars a little past midnight. The southern (top) half of the planet has dark "albedo" features topped by a small polar cap. The northern region is the desert region of Amazonis. Telescope: RV-6 Criterion 6" Newtonian reflector with a 2.5x TeleVue Powermate. 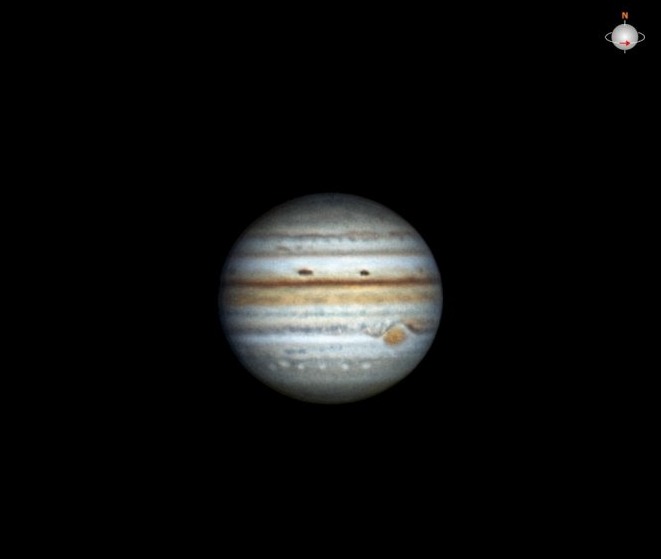 Jupiter featuring Great Red Spot and a row of storms appearing as white ovals below and to the left. Taken using the Cyrus 10" Newtonian reflector with a 2.5x TeleVue Powermate. 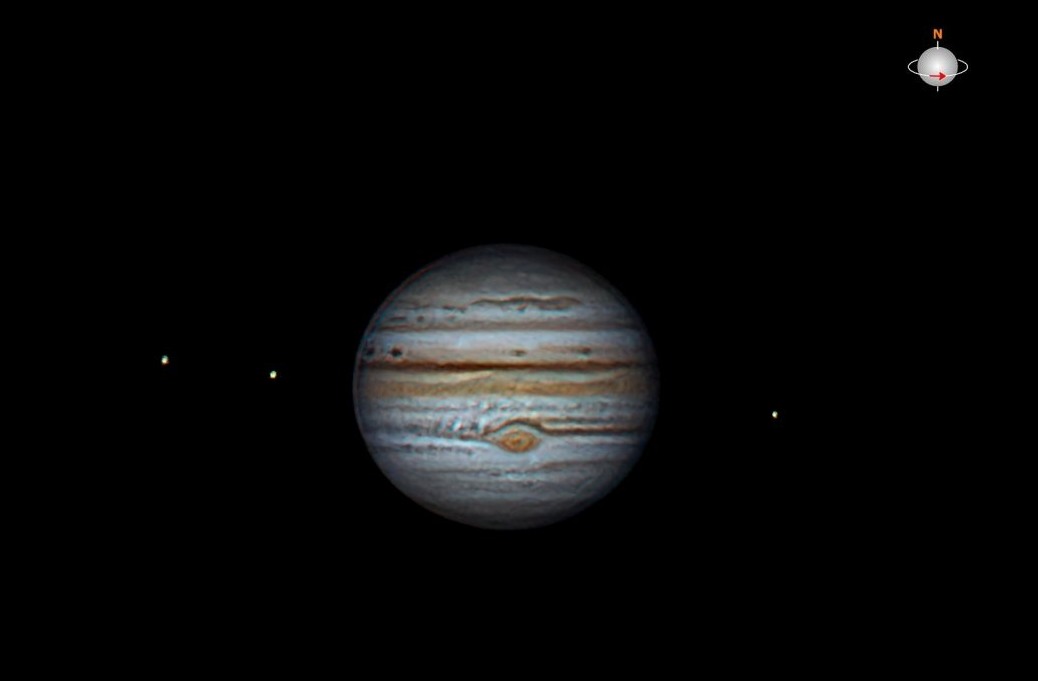 Jupiter around midnight featuring Great Red Spot front and center and its moons (from left to right) Ganymede, Io, and Europa. Taken using the Cyrus 10" Newtonian reflector with a 2.5x TeleVue Powermate. 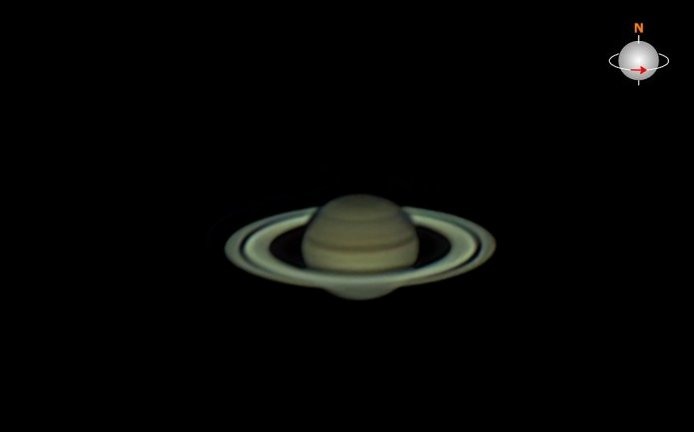 Saturn near opposition, displaying its unrivaled rings and stratified cloud bands in its northern hemisphere. Taken using the Cyrus 10" Newtonian reflector with a 2.5x TeleVue Powermate.

Saturn a month after opposition in 2021. The Cassini division separates the "A" ring from "B", and the globe is casting its shadow on the rings as they duck behind the planet on the left side. Taken using the Cyrus 10" Newtonian reflector with a 2.5x TeleVue Powermate.

Our sister planet Venus as a brilliant but featureless crescent in the evening sky. Taken with the RV-6 Newtonian telescope and a TeleVue 2.5x PowerMate to boost the magnification.

I set up pre-dawn Memorial Day to test out a new focuser on my 10” Newt on Saturn. The seeing was pretty decent so my efforts were rewarded with a pretty good capture (here) – a one minute video at 96 fps distilled down to about 1K of the best frames stacked and sharpened using PIPP, Autostakkert3, Registax6, and Photoshop. It was easy to note that the rings have definitely closed up some compared to last summer; we’re seeing far more of the southern hemisphere now. Also interesting is the current Sun-Saturn-Earth geometry is favorable to catch the shadow on the rings on the planet as a dark band on the rings’ southern edge as the cross the globe. 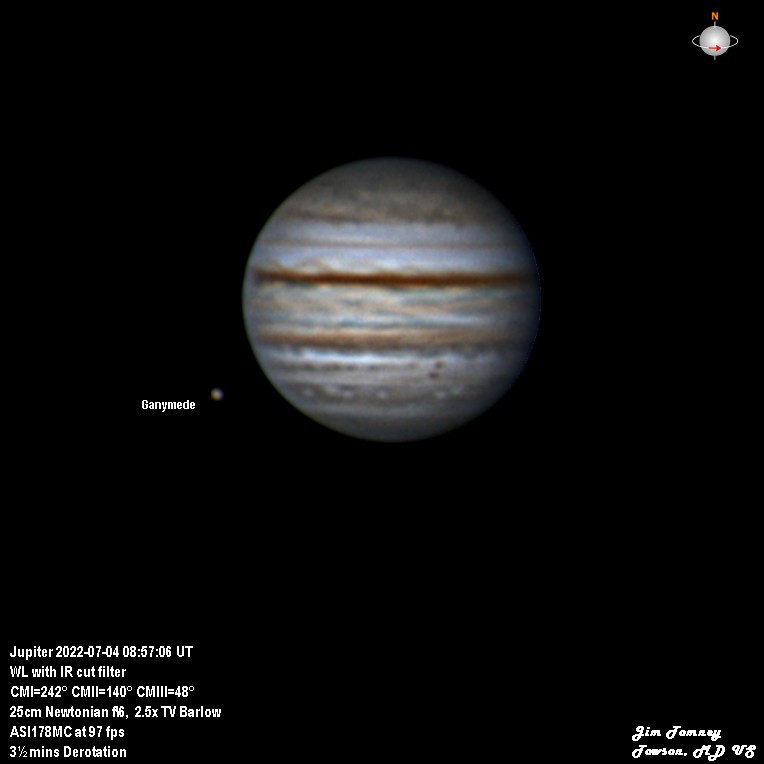 Ganymede is seen approaching Jupiter on the left. String of SSTB anti-cyclones is visible, possibly A5 as the leftmost one through A1 on right. Two dark condensations are in the STB roughly midway between the CM and preceding limb with the trailing one a little farther south (almost between STB and SSTB). The STB preceding the CM has several darker condensations within it. The southern edge of the SEB is scalloped with a strong loop festoon at about CM II 106°. The NEB is quite intense with a couple graceful loop festoons on its northern edge on the following side of the planet. 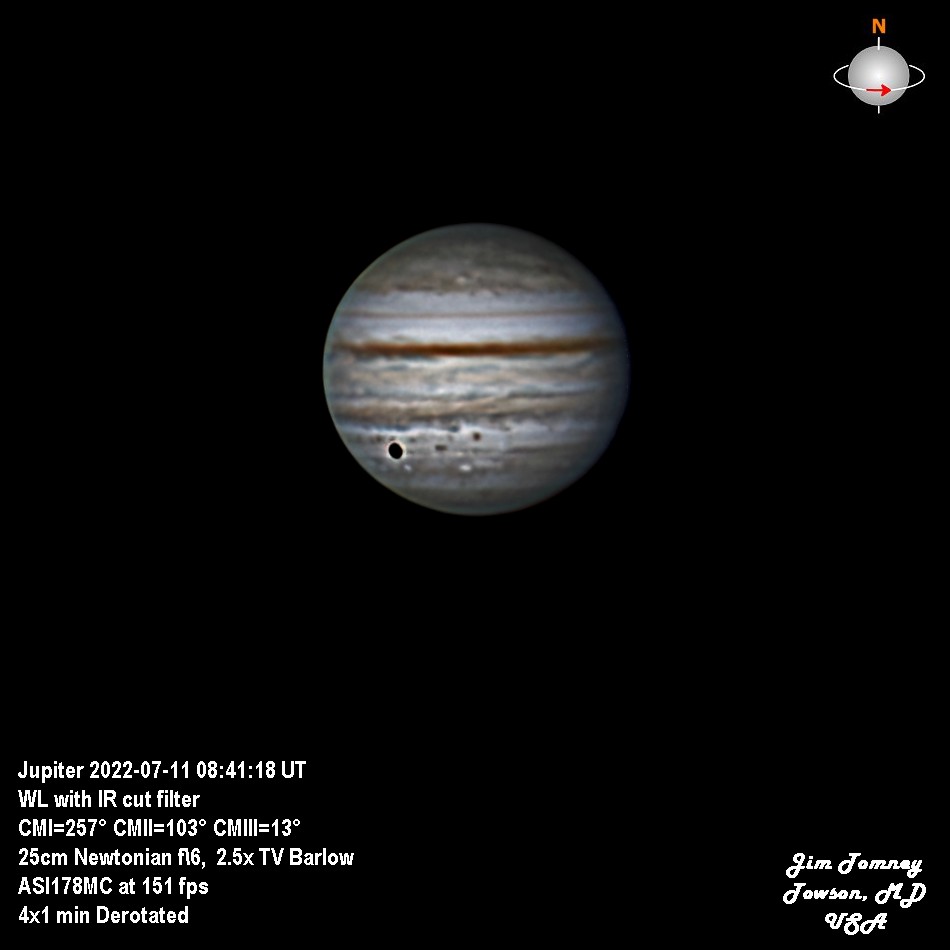 Up early to get some Jupiter imaging with the 10” reflector before work. The image shows Ganymede’s large shadow crossing the cloud tops, and a lot of activity in the SSTB below that with multiple white anti-cyclones seen (the most prominent near the meridian is A2, and the one to the left is A3). In the opposite northern hemisphere near the meridian is another storm, NN-WS-6, in which one can just barely discern a slight ruddy color (especially compared against A2). Shifting back to the southern hemisphere we have two dark condensations; one lies in the STB and is very close to the meridian, and another is farther along to the left and a little further south. The latter is probably DS8. It is interesting to see how these features are carried along at different rates; compared to an image from a week ago where these two were much close in longitude.

Mars from early morning session on July 11, 2022 with average to slightly above average seeing. V-shaped Syrtis Major is front and center in this capture with a bright Hellas oval to its south. M. Tyrehennum extends southeast off of Syrtis Major heading towards the evening terminator while M. Serpentis/M. Sabeaus flank it to the southwest. The SPC seems to have shrunk within the last week, just a tiny white pearl marking the south pole. Strong limb ring-artifact on the morning limb that I could not suppress with processing and still retain the albedo features.